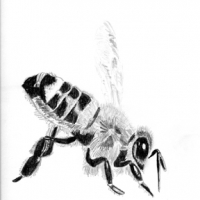 Here is an image from my first KAP session. What you see is the town of Penneshaw on Kangaroo Island in South Australia.

I used a GoPro Hero 4 Black in conjunction with my 9ft Levitation Delta. The GoPro was shooting 1 frame every 5 seconds. Setting up the camera rig took a lot longer than I expected. I wrapped a GoPro wrist strap around my picavet to mount the camera though this thing was a bit fidgety. One nice thing about this velcro wrist strap is you can rotate the GoPro to change your shooting angle. Though unfortunately, you can't lock the rotating plate so I had to duct tape it in place. It was also tricky getting the right length of safety line (too long and it would dangle in front of the camera lens and if it was too short, it would pull hard on the picavet and would probably interfere with it's job.)

The wind had increased significantly when I was bringing the kite down. As it was getting into the turbulent air, the Levi took a dive. I followed the advice on this forum and let out line during the dive but that didn't stop it from crashing. Though perhaps if it was higher in the air, letting out line may have had a different outcome. It was already fairly close to the ground when it dived.